Mary Kay Downes, MJE, prides herself on being in the know.

But this surprised her.

“It was a work day, and I was in another teacher’s classroom, working on some curriculum, when my phone started blowing up,” Downes said.

She found out she was being honored with JEA’s Linda S. Puntney Teacher Inspiration Award, an honor for motivating a pursuit of journalism education as well as longevity and achievement of other advisers.

Nobody else was surprised by the news.

“First, [on the phone] was Leslie Dennis from [the Southern Interscholastic Press Association]. I was shocked, overwhelmed and I got emotional,” Downes said. “The teacher I was working with was concerned. She asked if I needed help — and I just laughed and let her know it was all good, in a crazy way. I had no idea.” 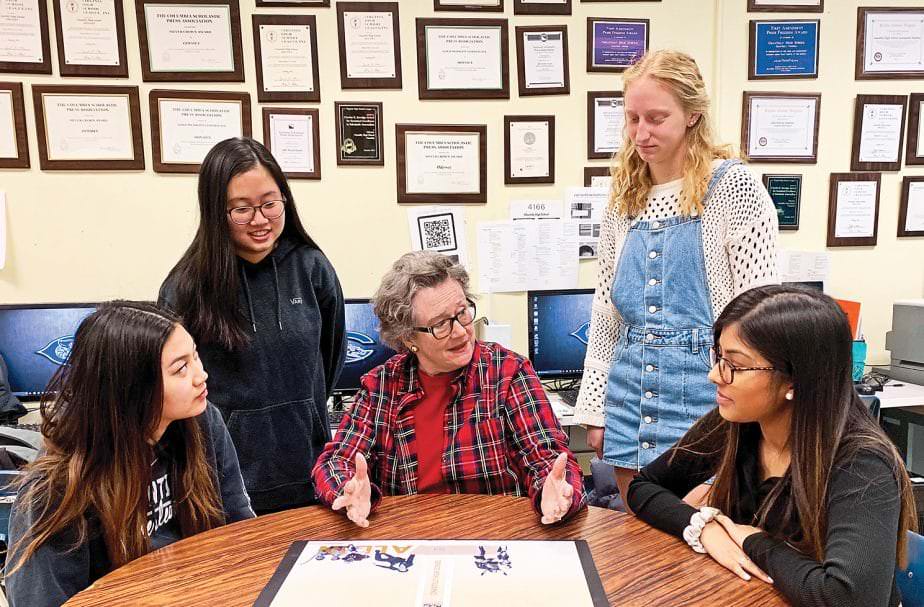 Advisers with whom she’s worked cite her as a generous expert, a guru of foundational skills and a coach for advisers and editors alike. She already has a list of awards a mile long. Among those, CSPA’s Gold Key, NSPA’s Pioneer Award, JEA’s Medal of Merit and National Yearbook Adviser of the Year honors, as well as an array of state and regional nods.

After falling in love with pubs as a college creative, she taught for years before returning to yearbook in 1987. Since 1995, the Odyssey yearbook has won 17 awards in NSPA’s Pacemaker competition and 12 Crown honors from CSPA. In addition, the book has earned four consecutive Col. Charles E. Savedge awards.

Nominated for the honor by a former editor, Katie Eklund Frazier, CJE, who now advises in Texas, and Val Kibler, MJE, JEA’s vice president, who also advises in Virginia, Downes’ nomination included letters from students and peers she has inspired.

Honored at the spring JEA/NSPA convention, Downes will also address attendees at the annual JEA Advisers’ Institute in July.

“I was humbled by the comments and compliments,” she said. “Ours is a world filled with many great teachers who could be honored in this way.”

MORE FROM THE QUEEN

Learn about years of yearbooking from the legendary MKD on the season two premiere of our podcast, Mind the Gutter podcast.

Use this step-by-step plan to conquer group photo day!

Herff Jones Portfolio Vol. 25. It’s our “best of” collection featuring amazing photography, covers, innovations and coverage from yearbooks we print each year. This year our editors carefully combed through the hundreds of entries we received and chose 477 schools whose yearbooks stood out above the rest. To all of …