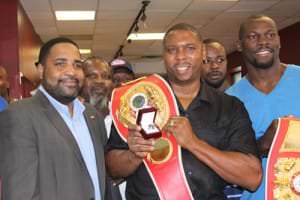 Boxer Charles “The Hatchet” Brewer finally got what he deserved: a ring from the International Boxing Federation for defending his super middleweight title three times in the 1990s.

“It was something that was long awaited and well past overdue,” he said. “But (winning the belt) was probably one of the most exhilarating feelings someone could ever experience.”

When IBF president Daryl Peoples presented the ring to him, Brewer let out a loud “Yes, Lord!” before watching it get placed on his finger.

Herff Jones was the proud manufacturer of Brewer’s championship ring.