It’s hard to guess exactly why the buy-rate at Blue Valley West High School in Overland Park, Kansas, is nearly twice the national average, but it’s not hard to understand how important culture and tradition are in the equation.

Throughout the school’s history, students have had the option to request a yearbook at registration, and that tradition alone delivers about 1,000 orders for the staff. But the staff works hard all year to keep Illumination front and center inside the school.

Making distribution a big event is definitely a factor. The books are traditionally presented to seniors first, at their celebratory picnic. Back on campus, the other students receive their books the same afternoon at an all-school event in grade-by-grade waves.

“It’s a great tradition,” said Deborah Glenn, CJE, Blue Valley West adviser for the last 10 years. “In the end, the whole school gathers back together to sign books and reminisce about another year.”

But throughout the year, there are jumbos, poster-sized prints of candid photos, posted all around the school. The idea presented itself more than five years ago when the staff watched a documentary on Pete Souza, a photojournalist and former White House photographer with Kansas ties.

“It was kind of funny,” Glenn recalled. “At one point he was explaining these ‘jumbos’ he’d hang — and change out every two weeks — in the White House.

We all just looked at each other and asked why we had never done that. We have all these great photographers and the benefit of a great photo services team in the district office.

Now, we send them PDFs of staff favorites, some in the book and many not, and they print out 14″ x 20″ slicks for us.”

They order two copies of each print, so staffers can deliver one to the subject of the image.

“We try to remind everyone on campus that we have photographers out there all the time capturing their memories,” she explained.

There might be as many as 50 jumbos on display at any given time, and Glenn estimates the staff has delivered thousands to those pictured.

“It definitely increases excitement for the book on campus, and we’ve been selling out in recent years,” she said. “We truly have just one copy left this year and we’ll be taking it to convention for Best of Show.” 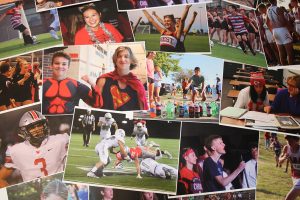 Photo by Photo by Reese Wheeler

CELEBRATING THROUGHOUT THE YEAR, the yearbook staff prints poster-sized versions of its favorite photos and posts them around the school. 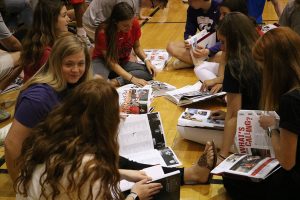 THE TRADITION and build-up to delivery day mean that the whole school wants to participate — and that means book sales are strong at Blue Valley West. Even though the picnic was rained out last year, seniors filled the gym floor to enjoy the yearbook.

Traditions and twists are both factors in selling more yearbooks
As an alum of the yearbook program at Columbus North High School in Indiana, adviser Roth Lovins, CJE, smiles when he and his Log yearbook staff uncover successful ways to sell more copies.

They work hard, he says, to create a great record of the year and they want as many students as possible to have a copy of the book so those memories will be accessible forever.

“We’re always trying new things to sell more books,” he said. “More reminders in and around school. More messages sent home. Messages on more channels. They are all a part of our plan.”

Now in its second year, Lovins introduced a four-book package which allows parents to purchase a set of yearbooks for incoming freshmen.

“There’s some additional record keeping,” he admitted. “But it’s worth it because they’ll never be disappointed when we sell out, they don’t have to worry about forgetting to buy and they save some money. And we have the guarantee that those students are buying all four books.”

As word spreads among families, he hopes the package becomes a tradition that lasts. “It just makes so much sense,” he said.

Other times, the staff looks for something unexpected. Whether it’s chalking huge sales messages on the walkways at the main entrance or papering the commons with order forms just before a price increase, they want to remind people that there is limited time to purchase a yearbook.

“It’s finding more ways to get the word out,” concluded Lovins. “And making the book as easy to buy as possible.” 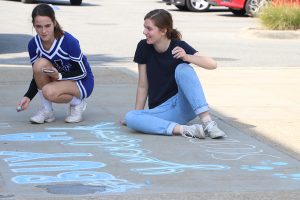 CHALKING A MESSAGE at the school’s main entrance reminds Columbus North students to buy a book.

A Yearbook is a Necessity

What is a yearbook? It is a memory book, a photo book, a reference book… It is all of these and much more.