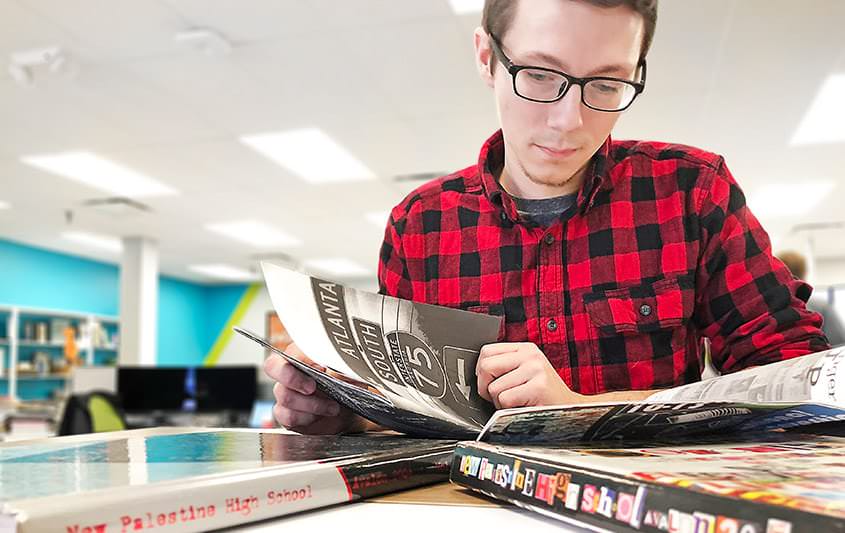 One professional designer has three JEA/NSPA conventions to thank for his career. So, take note fall convention attendees. You never know which students will find their callings, their careers and their tribes through high school publications. The industry’s next designers, writers and creative directors are probably attending this convention.

On Nov. 8 just after lunch, Kyle Lewis hopped out of his chair and left his office. He returned a minute later carrying a tattered, white cardboard box.

“My mom’s packing up a bunch of my old stuff and gave me these,” he said as he pulled out three yearbooks and three black and white student-made booklets.

A new graphic designer in Herff Jones’ Indianapolis headquarters, his co-workers were of course drawn to the yearbooks, picking on Lewis’ portraits and remarking at how fashion, design and the world changed in 10 years. They took note of how he had served as design editor of his senior book, a post which launched his career.

The books garnered the initial attention, but the soft-cover booklets incited a frenzy of coincidences. They were publications, reports even, of Lewis’ staff’s trips to three consecutive JEA/NSPA conventions.

As he told the story of the black and white booklets, Lewis’ co-workers realized, excitedly, he enters the Hyatt Regency exhibition hall today returning to the convention as a corporate employee working in the yearbook industry after having attended three consecutive conventions a decade ago as a student.

That dutiful little teenage designer would be shocked, he said, to know instead of working to recap convention goings-on for his principal, his work would be a part of a booth. (Those yellow-tipped banners and photo illustrations are his handiwork, by the way.)

None of this was part of his plan, he said.

“I took journalism my freshman year on accident. I misread the class listing and thought it was a journaling class.”

His co-workers giggled, too.

“At my high school, you took Journalism 101 freshman year, which is one semester of writing and one semester of design and photography. After, we worked on the publications, and I chose newspaper. But we didn’t get a chance to learn new techniques.”

He said JEA/NSPA conventions were worth the fundraising and the additional labor because, “we could learn from professionals and pick up other schools’ books and papers to get inspiration.”

After three years on newspaper staff, Lewis joined the yearbook staff to get more experience. He attended the 2006 convention as design editor of both publications.

“I like working on both,” he said. “With newspapers, you have a daily or weekly publication. With a yearbook or a magazine, you get something that lives beyond that week.”

With a degree from Ball State and a decade of working in the newspaper industry, he’s found his way home.

“I always thought I would work for a newspaper, but always had interest in working for a magazine. Working for Herff Jones is more like that.”

Will you be the next Kyle Lewis?

Open your eyes to possibilities, your mind to interests and make the best of both.

Read more yearbook blog stories like Love Letter and Yearbook is for Life.

This staff embraced a blended approach to content, meaning modules with clear separation space fill spreads as they fit together physically, but without unifying topics. Read more about how this approach made their anniversary yearbook one of the best yet.

The Purpose of Yearbook

In the children’s book Wilfrid Gordon McDonald Partridge by Mem Fox, a young boy searches for ways to find lost memories for an old woman who had lost her own. Through his persistent questions and vivid imagination, he inspires her to remember events from her past. A yearbook should allow any reader to do the same when it is visited years later.

Before taking on the responsibilities of the yearbook class, I was fortunate to attend a True Colors® seminar on personality typing that was offered by my yearbook rep.