My Life Beyond Yearbooks 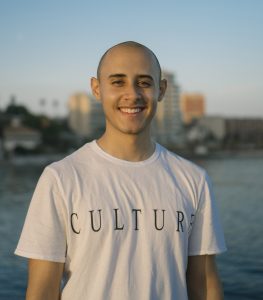 Cinco Ranch High School. Or his junior, or sophomore or freshman year. He can’t really remember why. He was still interviewed for his senior yearbook and even made a video, “My Life Through Yearbooks,” (above) which has more than 19,000 views on YouTube…

What he can remember, and what the video represents, is when he finally figured out what he was meant to do in life.

“I found filmmaking the last semester of my senior year. It was too late to apply to film school, but I wanted to go to University of Texas, Austin. It was even too late for that, but I got into UT, San Antonio.”

After taking introductory college classes and not really connecting, Montalvo found himself at a crossroads. He wanted to go to a real film school, but L.A. and New York were so expensive.

“I told my parents about film school, and they said, “Are you sure? Don’t you want to make money?” Montalvo said. “When all of my classmates were pursuing careers in medicine, law or business, it was like saying, ‘I want to be a cowboy or an astronaut.’

An interesting analogy for a kid who grew up in Katy, TX, just outside of Houston – he really could have been a cowboy or an astronaut. And still, filmmaking seemed like a stretch.

Montalvo had family in Great Britain and had visited them several times. He did the research and realized it was much more economical to pursue his career in London. So, away he went to Ravensbourne University London.

Now, a 22-year-old graduate with award-winning short films and corporate video projects on his resume, Montalvo has again decided not to make the expected career move — going to L.A. to take the big leap into filmmaking.

“Other international students told me, ‘It’s easy to go home, but it will be hard to come back.’ ”

Work visas and immigration policies put him at yet another crossroads. He decided he wanted to focus on his craft and work in the industry in Europe. In early October, he moved to Amsterdam, a country that will allow him to freelance and live with fewer employment restrictions.

That’s the thing about pursuing a creative career like filmmaking, writing or design, he said.

“You’re not being directed all the time. You have to do it out of your own will and your own heart.

It’s very scary to make that decision. But, it’s that fear you have to hold and embrace. That’s what keeps you moving forward.

Regardless of whether you’re a senior in high school or a college graduate,” Montalvo said, “It’s about being firm in your decision, about being excited and keeping that excitement.”

When looking at his high school journey, and thinking about the people who influenced him, Montalvo remembers an English teacher, Bruce Hayes, whom he had for both freshman and senior English.

“Mr. Hayes had taught English in Japan. On our first day of freshman year he started yelling in Japanese. Desks were everywhere. His class was chaos.”

Montalvo realized that was part of his allure as a teacher. Students never knew what to expect.

“His philosophy of teaching was ‘think for yourself’. He embraced what the students in the class wanted to do.”

He embraced Montalvo’s budding interest in video when he had made a short film, and Mr. Hayes asked him to show it to the class. That was his first audience and his first realization that he had found something he was passionate about.

“When you’re in high school everything moves so slowly. The pep rally is on Friday. The quiz is on Monday. The test is on Tuesday. You have so many things set for you. You go hour by hour.”

Five years later, and with a sister who’s a junior, also at Cinco Ranch High School, it seems like those high school years were so short. The day-to-day stresses his sister is consumed with are so small compared to where he knows she will go in life.

“Now, I’m writing more and reading more. I think back to things that I thought were inconsequential and irrelevant, and they make sense. Even reading The Odyssey; I’m drawing on that now.”

He thinks back to the films he made in high school.

But that’s not to say he has it all figured out.

“If someone reads this and thinks I really have it together. They’re wrong,” he said with a laugh. “I’m 22 now and I thought that 22-year-olds were adults, but I still feel like a little kid.”

Equal to his determination to succeed, Montalvo included the need to maintain his child-like excitement.

On set, when I talk to the crew and the actors, I always tell them, “Let’s take our work seriously, but let’s not take ourselves seriously. That makes a big difference.”

Yearbook is for Life

While the language varies, it’s no surprise so many people in the yearbook world share common sentiments. There’s a nearly universal dread as deadlines somehow become more difficult at the end. Everyone is busy and tired — maybe overwhelmed.

Yearbooks are something that will be looked at time and again over the years. Keeping yours in good shape will ensure you can pass it down for generations.

Advisers Jim Govreau and Morgan Miltner both submitted their final yearbooks March 9. But, they still have a book to complete. Read how these staffs teamed up to create a book in two weeks for a neighboring school in need.