These fundamentals of design can help ensure the success of any designer’s work; when you get to the point where you feel experienced enough to experiment, remember the reasons behind these guidelines (and “fix” every rule you break!)

Before placing the elements on the pages, you’ll need to make some book-wide decisions regarding the structure of the spreads. The layout sheets or templates show you several possibilities (or you may want to make adjustments).

The external margins on the templates provide a safety zone of a couple of picas, but most design experts prefer a wider margin that frames the page (4-5 picas look great, with 6-8 pica margins on the bottom of the spread). The margins should not vary through the book, so this decision should be made before the first template is opened; this way, your external margin will be the same throughout the book. Other structural consistencies would include the number of columns you use and the internal margin between columns or grids. 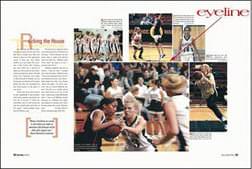 Before you start placing the elements on your pages, it’s also important to consider an eyeline. An eyeline helps unify your spread and increases the chances that a design will be effective. To create a single eyeline on a spread, simply pull down guides to create a consistent internal margin running horizontally across both pages of the spread. Use the guidelines to start and end elements; the spread’s eyeline is formed by aligning design elements horizontally so the consistent internal spacing extends most or all the way across the spread.

Two important things to remember about using an eyeline: first, it should never fall exactly in the middle of a spread since that would visually divide the spread in half. In addition, you will not want to break your eyeline more than once (otherwise, it will decrease its impact). 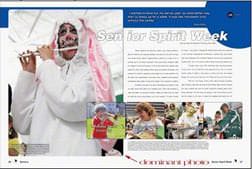 Photos are usually the strongest visual element in your yearbook. When designing your spreads, select the best photo, both in terms of its story-telling power and technical quality. The best image should become the dominant photo and should be at least two and a half times larger than any other photos on the spread. It should be the first element placed on your spread. The subject and action of your dominant photo should direct the eye to the center of your spread. Action shots should lead onto the page, not off. Never cut faces in half by placing them in or near the gutter. The dominant is often the one photo that violates the eyeline by extending to the top or bottom external margin.

Before you place additional photos, you’ll want to add your copy/headline unit. More often than not, the attention-grabbing main headline and the smaller, fact-filled secondary headline are positioned above the columns of the copy block to form a rectangle. This type package is generally positioned to the outside of the spread and it typically either falls below or rests on the eyeline. See headline writing tips here. 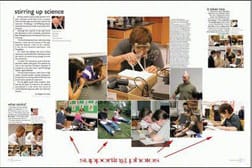 As you place supporting photos, you will work to use a variety of sizes and shapes of photos and to maintain consistent internal margins. In the strongest layouts, all photos will be clustered together toward the center of the layout. 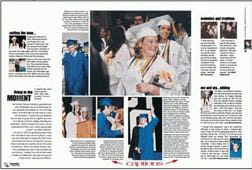 Captions are placed to the outside corners of the photo cluster, adjacent to the photos they describe (so it’s obvious which caption goes with each photo). All captions on a spread should be a consistent width and not trapped between photos. While traditional guidelines suggest that no more than two captions should be stacked together, many yearbooks use group captions like those seen in contemporary magazines. If your staff decides to use group captions, that should be a sectional decision rather than one designer’s prerogative and it’s crucial that each complete caption have some sort of starter or lead-in. See caption writing tips here.

The magic of yearbook lives on.We all know the traditional functions of a yearbook. Of course, it’s a memory book, a history book and the year’s consummate photo album. Without a doubt, it serves as a record and a reference tool, too.We’ve asked, “If it’s not in the book, did …

Depending on how you have your staff set up, you may wish to modify some of the following job descriptions:ADVISER Trains the staff to create the yearbook — but does not to do it for them. Gives advice and asks questions; however, the copy, the designs and the photos are …