Back to Parents & Students 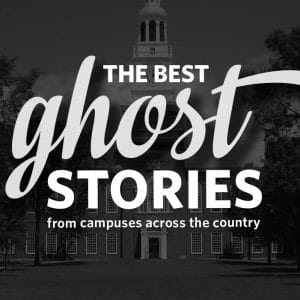 Getting into the Halloween spirit means having a little fun with haunted tales both old and new. Whether you believe in the paranormal or not, who doesn’t like to have a little scare? Little did we know, there are scary stories and legends on hundreds of campuses across the country. Here are a few of our favorites!

A Confederate surgeon whose collection of books was donated to the University in 1913 is said to haunt his books to this day, following them from one location to the next as they’ve moved over the years. Both students and library staff have noted feeling watched while in the building and hearing footsteps but not seeing anyone.

The actual school is relatively new, having just opened in 2002. But that doesn’t mean the grounds don’t have a history! The former Camarillo State Hospital was a mental health facility that closed its doors in 1997 before the school opened. Rumors have it that over 1,000 patients passed away while at the facility, some due to sickness and shock treatments. The 2002 horror film, The Ring, actually filmed on the campus too!

Salem, famous in its own right for the witch trials of the 17th century, also hosts a mysterious ghost in dorm room 222 in Bowditch Hall on campus. From banging noises on the walls to beds throwing occupants to the floor, there may be a witch looking for vengeance!

Last but most certainly not least…Many legends exist about the haunting of this campus. One in particular is a haunted dorm room in Wilson Hall that is currently sealed off. Room 428 has tales of flying objects and unexplained voices, along with the tragic death of a student in the 1970’s.

If you like being scared just as much as we do, here are a few more: Top 50 Haunted College Campuses.

We have provided some survey questions to ask high school students to inspire yearbook coverage ideas. Use these 50 top questions for surveys or as a jumping off point for yearbook interviews.

Everything you need to know about college graduation announcement etiquette.

Glad you asked! There are class rings. Then there are Herff Jones Class RingsAs leaders in the class ring industry, Herff Jones offers high school class ring choices that are not available anywhere else so you can make your ultimate statement.Exclusively at Herff Jones: Industry leading warranty where we won’t …