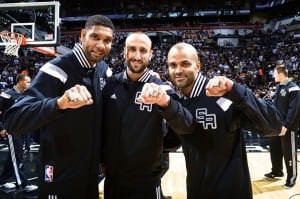 The 2014 NBA Championship rings were presented to the San Antonio Spurs on October 28 as they tipped off the 2014-15
season. The team won the season opener against the Dallas Mavericks, 101-100.

The Championship ring contains more than three ounces of 14 carat white gold with 5.09 total carat weight of diamonds.
The top includes 76 round, 10 princess cut, and four baguette diamonds. Around the edge of the top are 42 round diamonds.

The best detail is the inside inscription: “Good to great.”

They were good the year before, but last year the Spurs were great.