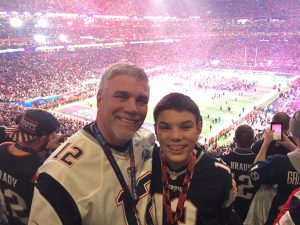 When you ask Senior Jewelry Designer David DeCosta to describe the most memorable pieces he has designed over the course of his 35-year-career at Herff Jones, he will tell you about far more than what meets the eye.

He will likely tell you about designing back-to-back championship rings in 2007: The Colts’ Super Bowl ring and the Anaheim Ducks’ Stanley Cup ring. Different colored stones and logos signified the hockey team’s transition from the Mighty Ducks of Anaheim to the Anaheim Ducks in 2006. The Colts ring features subtle nods to important symbols and phrases for the winning team. While there are many differences between the two, both rings required a lengthy design process, resulting in copious amounts of sketches on dinner napkins and airline miles accrued.

DeCosta might also tell you how he adds meaningful flare even when the client hasn’t requested it, like the time he added six tail feathers to the mascot on the shank of their class ring, one for each of the six committee members.

With each story he tells, his message becomes clear. Every piece of jewelry has a story behind it, and every design element is intentional. Therefore, every design is memorable.

And that’s why, all these years later, DeCosta can be just as inspired by his work as he was on the day he began his career.

CLASS RINGS THROUGH THE YEARS

A co-op led DeCosta to jewelry design when he was in college. He had similar roles at two other companies post-college before hearing about Herff Jones from a design colleague. Beginning as a part-time designer in 1984, it didn’t take long before he was brought on full-time. And now, more than three decades later, he is still doing what he loves.

DeCosta has experienced many changes over the years, from processes to technology to jewelry styles. Gone are the days of sketching by hand, thanks to programs like Photoshop and Illustrator. When he first started, there was a two-week turnaround time for artwork, but now he works with a two-day window. But that’s not because designs are more simplified.

“It used to be that classes would all have the same design,” DeCosta said. “And now it is all customizable, and everyone wants to have their own.”

In the early days of his career, he would go on the road to schools, drawing designs in front of the committee. He was creating a limited-edition ring for each school and each class that no one else would receive. While school color stones were once the norm, now students are opting to display their birthstones instead. Some may want the school’s mascot, while others may not. He notices patterns in design vary by states and geographical location more than anything else.

Having seen the evolution of class ring styles first-hand, DeCosta can rattle off dozens more examples that demonstrate how each generation is putting their own spin on the traditional keepsake.

However, there’s one thing that remains the same.

“We still capture life-long memories for our customers,” DeCosta said.